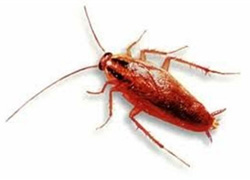 Adult German cockroaches are 1/2 to 5/8 inch long and tan to light brown. Although they have fully developed wings, they do not fly. Nymphs are similar in appearance to adults except that they are smaller and lack wings. The German cockroach is best identified by its small size and by two dark parallel lines running from the back of the head to the wings. It is usually found in kitchens (near dishwashers, stoves, and sinks) and in bathrooms of homes.

German cockroaches usually prefer a moist environment with a relatively high degree of warmth. The insects are mostly scavengers and will feed on a wide variety of foods. They are especially fond of starches, sweets, grease, and meat products. In many locations, garbage is a principal food source. As with other species, German cockroaches are mostly active at night, when they forage for food, water, and mates. During the day they hide in cracks and crevices and other dark sites that provide a warm and humid environment. Their relatively wide, flat bodies enable them to move in and out of cracks and narrow openings with ease. They may be seen during the daytime, particularly if a heavy population is present or if there is some other stress, such as a lack of food or water or an application of pesticides.

The German cockroach is the most successful of the species infesting buildings in Pennsylvania. There are several reasons for this cockroach’s persistence and the difficulty of controlling it. German cockroaches produce a larger number of eggs per capsule and they undergo the shortest time from hatching until sexual maturity, resulting in a rapid population growth. A greater number of nymphs hatch successfully because the female carries the egg capsule during the entire time the embryos are developing within the eggs. Also, and most importantly, German cockroaches are smaller than most other cockroaches and can conceal themselves in many places inaccessible to individuals of the larger species.

Adult male brownbanded cockroaches are about 1/2 inch long and light brown, with fully developed wings . The adult females are shorter and stouter than the males and their wings do not cover the entire abdomen. Both adults and nymphs can be distinguished by the two brownish, broad bands across the body at the base of the abdomen and at mid-abdomen. Both males and females are quite active; adult males fly readily when disturbed.

Brownbanded cockroaches prefer warm and dry locations, such as near refrigerator motor housings, on the upper walls of cabinets, and inside pantries, closets, dressers, and furniture in general. They can also be found behind picture frames and beneath tables and chairs, and inside clocks, radios, light switch plates, doorframes, and dressers. It is common to find them hiding nearer the ceiling than the floor and away from water sources. Accurate identification is paramount to controlling brownbanded cockroaches. Control strategies for other cockroaches will not be efficacious for brownbanded cockroaches. 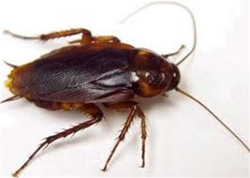 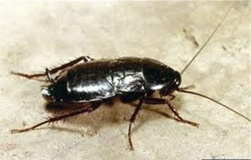 Oriental cockroaches are often called water bugs because of their preference for dark, damp, and cool areas such as those under sinks and washing machines, and in damp basements. This species, which is less wary and more sluggish than the others, of concern because it often travels through sewer pipes and lives on filth. Adult Oriental cockroaches are about one inch in length. Both male and female adults are very dark brown, nearly black; their bodies usually have a somewhat greasy sheen. Females have small, functionless, rudimentary wing pads and broader, heavier bodies. Males have wings that cover only about three-quarters of their abdomen. Males are apparently unable to fly.

Nymphs and adults have similar habits and are found with decaying organic matter indoors and out. Indoors, Oriental cockroaches prefer dark, moist areas such as under porches, sewers, drains, crawl spaces, dark, damp basements, and floor drains. They can be found outdoors in abandoned cisterns and water valve pits; in yards; beneath leaves; in bark mulch around shrubs, flowers, and foundations; in dumps, stone walls, and crawl spaces; and in garbage and trash dumps and trash chutes. Both nymphs and adults are sluggish and are usually situated at or below ground level indoors. They are seldom found on walls, in high cupboards, or in the upper floors of buildings.

At times large numbers occur in one great mass around leaks in the basement or crawl space areas of homes. Oriental cockroaches are generally found outdoors during warm weather, but in periods of drought there may be considerable movement into structures, apparently in search of higher humidity. They may enter the home in food packages and laundry, or merely come in under the door or through air ducts, garbage chutes, or ventilators.