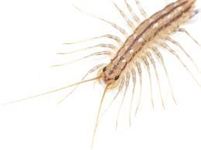 Centipedes are elongated, flattened arthropods with numerous legs – one pair per body segment. They are predaceous on many different arthropods including insects. Although all centipedes have poison glands and the means to inject their venom, bites are infrequent and normally do not cause more than temporary, localized pain.

Most centipedes can be found under boards, logs, rocks and other protected, damp locations outside. These centipedes are of little concern to homeowners. The house centipede, believed to have originated in the Mediterranean region, was introduced into Mexico and the Southern United States and has increased its distribution. It was first recorded in Pennsylvania in 1849. Today, the house centipede can be found in many buildings throughout the United States. It does not survive winters outdoors in Pennsylvania, but readily reproduces in heated structures.

Because of their secretive nature, scary appearance and darting motions, homeowners typically fear the house centipede. In 1902, C.L. Marlatt, an entomologist with the United States Department of Agriculture writes in Circular #48 – The House Centipede: “It may often be seen darting across floors with very great speed, occasionally stopping suddenly and remaining absolutely motionless, presently to resume its rapid movements, often darting directly at inmates of the house, particularly women, evidently with a desire to conceal itself beneath their dresses, and thus creating much consternation.” Undoubtedly, the current favor of blue jeans as a preferred article of clothing has not appreciably reduced the angst felt by the household “inmates” when a centipede is seen scurrying across the basement floor.

The house centipede adult has 15 pair of legs with the last pair (on adult females) nearly twice the length of the body, which is one to one and one-half inches in length. This gives the centipede an overall appearance of being from three to four inches in length (including legs and antennae). The legs are banded light and dark, and the body is a dirty yellow with three longitudinal, dark stripes. Newly hatched larvae (rarely seen) have four pair of legs. During the next five larval molts, the centipedes will have 5, 7,  and 13 pairs of legs. On the next molt the centipede is considered an adolescent and will have 15 legs during each of the next four molts – when it becomes an adult.

There are six larval instars or molts, and four post-larval instars before the centipedes reach maturity. Females have been known to survive for several years and produce numerous offspring (maximum of 150). During the daytime, the centipedes inhabit dark, damp locations in the home and come out at night to forage for prey.

House centipedes feed on silverfish, firebrats, carpet beetle larvae, cockroaches, spiders and other small arthropods. If house centipedes are seen frequently, this indicates that some prey arthropod is in abundance, and may signify a greater problem then the presence of the centipedes.

Locations within structures that have been known to provide safe harborage for house centipedes include:

Beneath concrete slabs – the centipedes enter the house through expansion cracks, around sump pump openings or other breaks in slab integrity;

Inside cement block walls – the centipedes can enter through uncapped blocks, missing mortar between blocks and around pipes where they pass through the walls;

In floor drains without water traps – especially those drains that are connected to dry sumps;

Under and in cardboard boxes that are stored on slabs;

In any damp, cool location, such as unexcavated areas (crawl spaces) under the house.