Boxelder bugs are primarily a nuisance because they enter homes and other buildings, often in large numbers. Fortunately, they do not bite people and are essentially harmless to property. When abundant, they can stain walls, curtains, and other surfaces with their excrement. Occasionally some may seek moisture and may be found around houseplants, although they rarely attack them. In the few cases when they do feed, boxelder bugs are very unlikely to injure indoor plants. 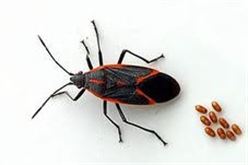 In Minnesota, boxelder bugs emerge from overwintering sites during spring as the weather starts to warm up. Adults feed on low vegetation and seeds on the ground during spring and early summer, and begin mating a couple weeks after they started feeding. Starting in mid-July, they move to female seed-bearing boxelder trees  where they lay eggs on trunks, branches, and leaves. They are rarely found on male boxelder trees. Boxelder bugs may also feed on maple or ash trees. There is no noticeable feeding injury to these trees. During years of high populations, you may find nymphs on the ground or in gardens feeding throughout the summer.

During late summer and fall, boxelder bugs start to leave the trees from where they were feeding to find protected areas for the winter. Although nymphs may be present in the fall, only fully grown adults survive the winter. Adult boxelder bugs typically can fly several blocks, although in some cases they can travel as far as two miles.

Some homes are especially attractive to boxelder bugs, while neighboring buildings may have few. This usually depends upon the amount of sunny exposure a building receives. Boxelder bugs like warm areas and are attracted to buildings with a large southern or western exposure. Buildings standing taller than surrounding structures or standing isolated on flat ground can also attract large numbers of boxelder bugs. Color does not appear to influence boxelder bugs as they are found on buildings of all hues.

As the weather cools, boxelder bugs push into cracks and spaces around homes. In some cases they end up in the interior of buildings where they are often found around windows. They remain active until it becomes cold, which could continue into winter when the weather is mild. While you may see persistent numbers of these bugs, individuals are short-lived, only surviving for a few days up to a week. Other boxelder bugs end up in sheltered areas in walls, attics and similar areas where they remain until it warms up.

During winter, boxelder bugs are generally inactive. However, during mild, sunny days, boxelder bugs become mobile with the increased temperature. They enter a home’s interior from overwintering areas within the home, e.g in walls or attics. As they wake up, they follow the warmth into the home’s living quarters. Once there, they typically move towards windows and other sunny areas. However, the warmth does not reach the insects equally and they do not all become active at the same time.

Eventually by spring, all the surviving boxelder bugs that overwintered inside buildings become active. They try to move outdoors but many remain trapped inside. Despite the circumstantial evidence, they do not reproduce in homes — all the boxelder bugs seen inside during winter and spring entered buildings the previous fall.

Boxelder bugs are not a serious problem every year. They are most abundant during hot, dry summers when followed by warm springs.